Paradise with a sting in its tail 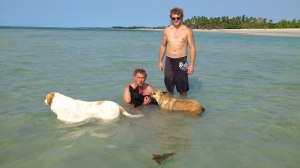 Paradise with a sting in its tail!

Before I even begin, I must say that I am still challenged in doing a blog, and it is trial and error in compiling the post to look like anything – I hope that with time I get right!  But thanks for reading anyway.

The past 3 days have been trying – and I often sit and look out at the beauty around me and wish it did not also attract any negatives, or like Marc put it, “seems like you found your own piece of Nirvana, pity the mosquitos found it too!”

Coming from Malmesbury, and living on a mega sized dairy farm (the biggest in Africa at least), brought its own pests, mainly flies.  I hated them with a passion and we had all sorts of warfare going on at any given point in time to combat them, ranging from ultraviolet lights to attract and stun them so they would fall down on a gluey piece of paper and eventually die, to the real thing, that on impact will shock them to death with the resultant dispersing of pieces of insect and sometimes even the smell of burning meat – yes, even from an insect.  Even worse, we got the odd bird in there after the insects, only to end up roasted as well.  I tried all sorts of herbal remedies, from lemons spiced with gloves, to eucalyptus oil.  Nothing worked; I only fooled myself into thinking some days were better than others.

But here, o here in paradise, lurks the filthiest bloody insect of them all, the one that made me almost give up hope this past week that my beloved big Labrador, Bonjo, and my sweet, boisterous Scottie, Whiskey will see the next day.  TICKS!!!  Ticks everywhere, and even though we’ve sprayed the garden twice already with a dip mixture used for livestock, I still get up at night for the obligatory pee or two, only to find out the next morning that my feet encountered some bloated tick which obviously then exploded, leaving a nice footprint of blood spots to the bed.  Even found one or two in the bed initially!

And so, my dogs got tick bite fever, or at least most the symptoms lead us to believe that.  And we hardly slept, and we sat and lay with them on the carpet, and stroked them and picked them up and placed them under the aircon, and gave them all the muti we thought would do the trick, and by yesterday morning, Bonjo’s eyes seemed a bit brighter than the day before.  Whiskey, who on the other hand ate well the day before, was now the listless one.  So another half Disprin had to be administered.  And they have both gotten up with waggy tails this morning!  Hallelujah!  I could not face the prospect of having flown my dogs thousands of kilometers to join us, only for them to succumb to a bloody disease they probably could have picked up on the farm in Malmesbury as well!

And if that was not all, Sakkie got severe middle ear infection, the sea to blame this time, and is now on his second lot of antibiotics, and seemingly on the mend.  So one would think that was enough for this week, but noooo!!!!  Whilst Skyping with my dear friend Willi in Cape Town on Tuesday evening, downstairs in the dining room, all sorts of insects thought it a good playground for the evening.  One second I still felt a little tickle by my ear, and naturally stuck my pinkie in to scratch, only to realize that I had now aided some little insect to find a softer, darker, moister spot deeper inside my eardrum!!!  And the sports began.

First Kobus tried to get the little perpetrator out with some tools from his medicine box.  At some point he almost pierced my eardrum, and with me shrieking like an injured banshee, he jumped back and stood there shaking, too scared to go near my ear again.  So Sakkie had to be called so that he could try and help with possibly seeing better with his young eyes.  A torch helped, and he scratched – my heart beating out my eardrum – excuse the pun again!  No go, the little monster had firmly gotten stuck behind “some bendy part” of my ear.  I knew by then it was black and also thankfully dead according to my two “doctors”.  All this took about an hour of me lying this way and that way on the bed, bashing my head on the opposite side, eye drops squirted in etc etc, to absolutely no avail.  Eventually my genius man took out a magoeloe (monster) of a syringe, fitted a small flexible pipe to the end and asked me to go and stand over the basin whilst squirting water from the syringe as hard as possible into my ear.  Only the second time around did we actually see said monster emerge and as quickly as it entered my ear, it disappeared down the plug hole.  I was finished!

Since then, I could swear I have felt it wriggling in my ear sometimes, but torch-in-hand I have been assured by both “doctors” that it is my fertile imagination.

And back to me saying we think the dogs had tick bite fever:  We also had the two of them, not the third one, Jackie, eat some pineapple chunks with us on the beach last Sunday, and every time they vomited, another piece of pineapple emerged, intact.  Which made me remember how incredibly sick I was last year, when on our annual trek to the Olive Festival in Riebeeck Kasteel, I ate some oysters on the first farm where we stopped for wine tasting.  Well, we did not even make it into town before I starting being sick, and I did not stop feeling sick until the last oyster was deposited on the pavement, in the streets of Malmesbury, where my fellow bus passengers, now all suitably inebriated, danced and cavorted with street kids whilst the bus radio blared out some music, and even in my total misery I had to laugh at the absurdity of it all!!  I kept a paper bag close at hand all the time for the rest of the trip home, only for the chap sitting next to me telling me:  “Don’t worry, you will sober up again and feel better!!”  Ha-ha.

So then, it leaves the question, do dogs get sick from pineapple, or was this a case of tick-bite fever gone worse with acidic pineapple in tummy?

We are going to movies tonight, and I will make sure it is a comedy, or action movie – NO GOGGAS!!!

Fell in love again at age 50! And followed my man to Zanzibar, for him to set up a dairy farm. I managed to travel into Africa a few times in my life, always loving it and experience the "fever" that grips you on African soil - the one that especially the Europeans now and in years gone by, suffer from. Except I am an African by birth - a South African. A Mzungu.So I discovered at this late stage in my life (not that I feel old!) that some people find my babblings about life interesting, and I quote: "live their lives vicariously through me".
View all posts by suletta →
This entry was posted in Africa, Dar es Salaam, South Africa, Zanzibar and tagged Africa, Cape Town, Insect, Labrador, Malmesbury, Nirvana, Tick, Tick-borne disease. Bookmark the permalink.

8 Responses to Paradise with a sting in its tail