Springboks vs All Blacks – as watched by ex-pats in Dar!!

Saturday morning found us heading over the ferry at some God-forsaken hour like 7 am (early for us on a Saturday), so that we can be at the George and Dragon English Pub in the more Mzungu area of town by 8.30 am.  We were invited by CFAO Motors to join them for a breakfast and then to watch the rugby match between South Africa and New Zeeland. 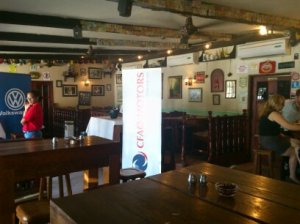 Now for any true-blooded South African, the All Blacks are arch-enemies, and rugby being our national sports, makes for tempers, egos, wannabe team players and national pride to emerge in full force at such games.

The George and Dragon is a typical English pub, with great food and we were thoroughly spoiled with a cold-buffet which included copious amounts of Nutella over fresh fruit to satisfy my sweet tooth, a plate of traditional hot English Breakfast complete with sausage and egg, and for anyone still feeling peckish during half time, true South African style boerewors rolls with onion relish were served up.

We could all venture a guess at the final score, and Kobus and I felt like traitors for not believing that the Boks could win, reflecting it in our predictions of a close win to the All Blacks.  A big-screen T V was laid on for the event, and to much pride and applause after singing the National Anthem, we settled down to the obligatory All Black Haka – a ritual they perform before the kick-off, intended to scare the living shits out of their opponents.

At half-time we were already behind on score, and  I had to laugh when an apparent South African supporter in his traditional green t-shirt promptly took off the T to unveil an All Black T-shirt!  Talk about being a traitor!!

The final score was in favour of the All Blacks, but some other guests were more spot-on with the final score prediction and walked away with some prizes.

So the verdict?  All over the world, in any pub they could find, you were sure to have found some staunch South-Africans supporting their team last Saturday. 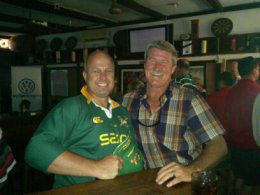 The funny part after all was done??  Provincial rivalry reared its head and mutterings of “it was a Blue Bull game”, or a “Stormers” game, or a “Vrystaat” game!!!  Ha-ha!!  It was hugely entertaining, and a big thank you to Alex and his team from CFAO Motors!!

Fell in love again at age 50! And followed my man to Zanzibar, for him to set up a dairy farm. I managed to travel into Africa a few times in my life, always loving it and experience the "fever" that grips you on African soil - the one that especially the Europeans now and in years gone by, suffer from. Except I am an African by birth - a South African. A Mzungu.So I discovered at this late stage in my life (not that I feel old!) that some people find my babblings about life interesting, and I quote: "live their lives vicariously through me".
View all posts by suletta →
This entry was posted in Love and Life, South Africa and tagged All Black, All Blacks, Free State, Mzungu, National Anthem, New Zealand national rugby union team, Nutella, Saturday, South Africa, Stormers. Bookmark the permalink.

3 Responses to Springboks vs All Blacks – as watched by ex-pats in Dar!!