I had the privilege to be invited with on a business trip this week, and our mode of transport was a lovely 4 seater aeroplane.  I have been spoilt in my life, having flown various aircraft (or rather been a passenger, except for the odd kind gesture of the pilot to allow me to hold the steer on occasion).  I have taken a glide over Vic Falls in Zimbabwe, seeing the majesty of this Wonder of the World from the skies, I have seen the Falls from a bubble helicopter, landed on a lake in a ski-plane, glided around the Brandwacht Mountains around Worcester in the Western Cape, even circled above the Atlantis Dunes in a small two-seater.  This however, was to be my first trip across the Free State, en route to Dundee in Kwazulul-NAtal, and I looked forward to it, as I wanted to get a closer look at the lovely farmlands in this part of South Africa.

We left early morning, our pilot was highly skilled, the weather played along so well, so the take-off and flight was as smooth as a baby’s bottom.   The mighty Vaal River seemed asleep still as it was covered in mist.  We passed the Bloemhof Dam, flew over towns like Welkom, Bethlehem and about one and a half hours later we landed in Dundee, after the pilot circled the airstrip a few times to gauge the wind.  We were met by our host who then took us to his beautiful and successful farm.  On the way back, we stopped at his incredibly beautifully decorated home to use the toilet before the flight home, and I marvelled at the decor and vistas of this historic home.

As a special treat, we got some Kentucky Fried Chicken in town, (no such luxury in our small town), and took off.  I wonder how many people can say they have eaten the Colonel’s recipe chicken in a small aircraft whilst marvelling at the snow on The Drakensberg in the distance. 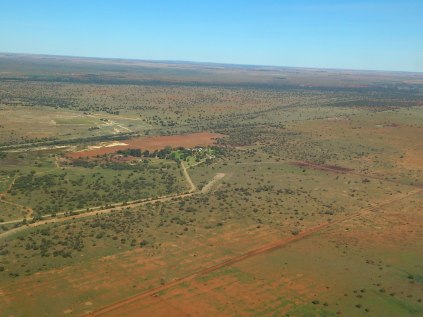 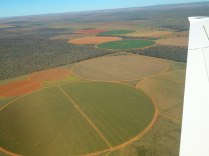 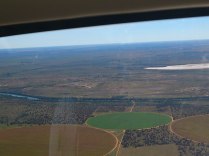 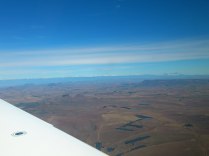 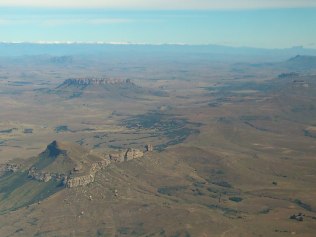 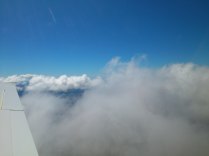 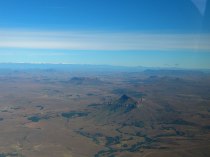 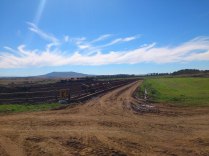 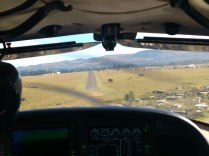 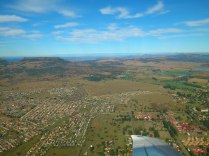 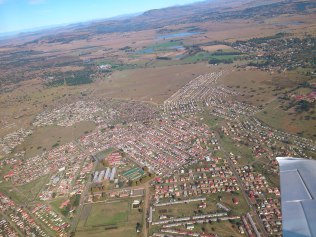 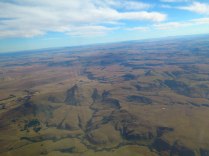 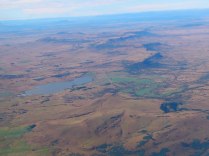 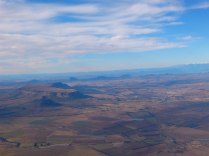 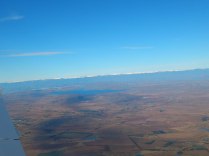 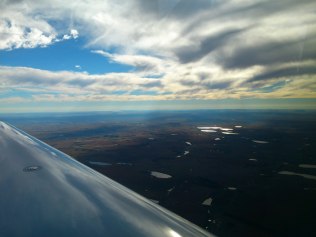 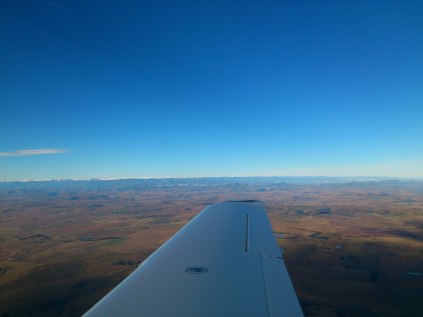 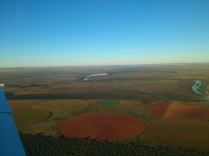 With full tummies, Kobus and I dozed off until just before landing, so I had a good view of my home from the skies, and although the house is enormous, it looked like a little shack from the sky!

After a safe and smooth landing, I returned homewards, to normal life, contented to have added another adventure to my memory list.

Fell in love again at age 50! And followed my man to Zanzibar, for him to set up a dairy farm. I managed to travel into Africa a few times in my life, always loving it and experience the "fever" that grips you on African soil - the one that especially the Europeans now and in years gone by, suffer from. Except I am an African by birth - a South African. A Mzungu.So I discovered at this late stage in my life (not that I feel old!) that some people find my babblings about life interesting, and I quote: "live their lives vicariously through me".
View all posts by suletta →
This entry was posted in Africa, Nature, South Africa and tagged Bethlehem, Drakensberg, Dundee, Free State, KwaZulu-Natal, South Africa, Vaal River, Welkom, Western Cape, Worcester, Zimbabwe. Bookmark the permalink.